Rust is a recurring issue for car owners, but how much rust is too much rust? How do you know if it’s too late for car rust repair? And if you’re shopping for a used car, should rust be considered a deal-breaker? 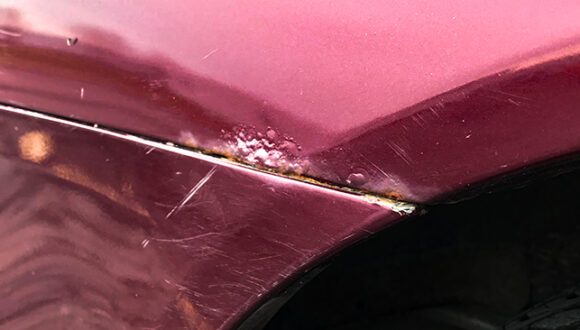 HOW TO REPAIR RUST ON A CAR

Rust repair on a vehicle depends on the type of rust you’re tackling. Minor surface rust is the easiest to deal with, and eliminating it is the best way to prevent major problems down the road. Sanding down to the bare metal, applying an inhibitor, then priming and repainting the surface makes a good project for any DIYer! On the other hand, bodywork and frame repairs usually require more time, skill, and money than many DIYers can afford.

Make sure to assess the damage before starting such a project!

Of course, pet projects and restorations are an entirely different story. When you’re working on an old vehicle, learning how to remove, restore, and replace major components is a fulfilling experience.

Surface rust can be sanded out and repainted, and possibly body-filled, but rust holes will require welding or new body panels. Surface rust on the frame rails can be repainted and undercoated, but flaking rust can seriously weaken the structure of a vehicle. On any kind of vehicle, body panels are integral to the safety cell, and any weakness can jeopardize your safety in a crash.

While car rust repair is a valuable skill, car rust prevention is undeniably more cost-efficient. Be sure to check out our previous post on how to keep rust at bay.